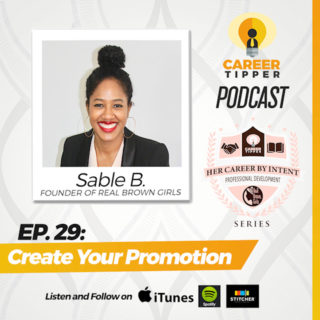 Create Your Promotion w/ Sable B.

Episode 29 features Sable B. She’s returning for the third interview of our three part series connected to our course, Her Career By Intent. Sable B. is the creator of the professional development organization for Women and Girls of Color, Real Brown Girls. The organization promotes a community of women online and in the world who understand the value of supporting other women of color who seek to advance professionally . Over 35,000 Women and Girls of Color are a part of the online community. Sable curates experiences through multiple platforms that caters to women of color looking to grow as a professional and advance in their respective careers. She is on a mission to let women of color know and believe that career advancement is possible. We’re going to continue our conversation from last week and discuss the third and last focus of the Her Career by Intent series, Create Your Promotion. Sable is going to share why it’s time to start telling yourself why you can and start focusing on how you will create the promotion that you want to position yourself for.